Randolph County is a place with a long and unique history. This history continues to shape the community’s values and way of life.

The first white settlers in what became Randolph County were Thomas W. and Anne Parker and their family, Quakers from Carolina, who arrived in 1814.

The Indiana General Assembly authorized the formation of Randolph County in 1818, naming it for the North Carolina, home of many of the area’s Quaker settlers. The county’s government was organized in August 1818 in the cabin of Benjamin Cox, a prominent Quaker who was a native of Randolph County, North Carolina. Five early settlers donated land for a county seat in 1818. Winchester, almost certainly named for Winchester, Virginia, was platted upon the site the same year and has remained the county seat for nearly two centuries.

Randolph County’s early history is distinguished by its embrace of abolitionism. Union Literary Institute, a racially-integrated school in the southeastern part of the county, was established in 1845. The county was home to three distinct settlements of free African-Americans, and numerous pieces of documentary evidence exist to that show that the county was an important part of the Underground Railroad.

The period immediately before and just after the Civil War brought prosperity to Randolph County. Railroads created or revived all of the county’s other important towns: Farmland, Losantville, Lynn, Modoc, Parker City, Ridgeville, Saratoga, and Union City.

The discovery of oil and natural gas in the 1880s and 1890s brought industry. Winchester was dominated by the glass industry, while Union City’s industries were dominated by auto parts manufacturing. These activities remain important today.

Since Indiana was a political swing state during the Gilded Age, as a reliably Republican county, Randolph County took on new importance. Between 1850 and 1930, Randolph County produced one U. S. Senator, one U. S. Congressman, two Indiana Governors, one Indiana Lieutenant Governor, three Indiana Secretaries of State, and one Indiana Superintendent of Public Instruction. 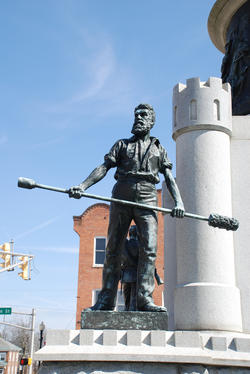 The Randolph County Historical Society is a membership supported society Give Now!

The Indiana General Assembly authorized the formation of Randolph County in 1818, naming it for the North Carolina, home of many of the area’s Quaker settlers.

Hours of Operation: Monday-Friday
1:30pm – 6pm or by appointment.

Become a member today for ONLY $15 per year. Your membership helps directly support the Randolph County Historical Society.